Pork belly is a lesser-used part of the animal, thanks in part to the fact that most of it ends up as bacon. But, as much as we love bacon, it’s got nothing on perfectly crispy pork belly slices.

The problem is, since many people are unfamiliar with it, it often gets prepared poorly or just plain wrong. And we aim to fix that. In this post, you’ll learn a thing or two about pork bellies, how to cook them, and what are some of the easiest and most delicious recipes to use.

By the time you’re done reading, you’ll be ready to do your pork belly justice.

How to Cook Pork Belly Slices in Oven

If you want to keep things simple, here’s what you’ll need:

First, preheat your oven to 400℉. Salt the slices evenly on both sides. Then, arrange your slices on a baking sheet lined with parchment paper. You’ll need to drain the pan of fat midway through. Alternatively, you can use a baking rack instead and not worry about draining it. You’ll end up with slices that are a tad crispier but also drier.

Bake the pork bellies for thirty 30 minutes and then flip them over – bake for 30 more minutes or until they’re completely browned and crispy. Use these times as a guideline, but check on your slices regularly. If they’re thinner, they’ll need less time in the oven. Thicker slices cook slower.

That’s the gist of it.

If you want to get creative, there’s certainly some room for that as well. Paprika, fresh ground pepper, and other spices all work well, used sparingly. You can also brush them with soy sauce before baking. A light coat of barbecue sauce can work as well.

That’s slices. Now, if you have an entire pork belly, it’s a little more involved.

How to Make Baked Pork Belly

Unlike slices, a section of pork crackling will take quite a while to bake well, but you’ll also end up with a more substantial meal.

Start with a nice, big piece of pork belly. About 2 pounds will be perfect. Score the skin with the tip of a knife. You want to cut just through the skin, but don’t go as far as the meat. You can make parallel cuts or create a checkerboard pattern – both work fine.

In an oven-safe pan, drizzle a dash of oil and lay the pork skin down into the pan. It’s essential to start with a cold pan and let the heat work into it slowly. Preheat your oven to 320℉ while the skin sears.

Once the fat starts to render a bit and the skin crisps up, turn it over. Put the pan into the oven and let it roast for about 2 hours. You’ll want to cook it low and slow because it needs time to get tender without burning the skin. If the skin isn’t completely crispy, crank up the heat to 425℉ and roast for about 20 more minutes.

When the skin is crispy, and the meat is falling off the bone, it’s done. Let it rest for about 10 minutes outside the oven and slice it thinly to serve. Again, this is the simplest way to go about it. Feel free to experiment with flavors and seasonings. 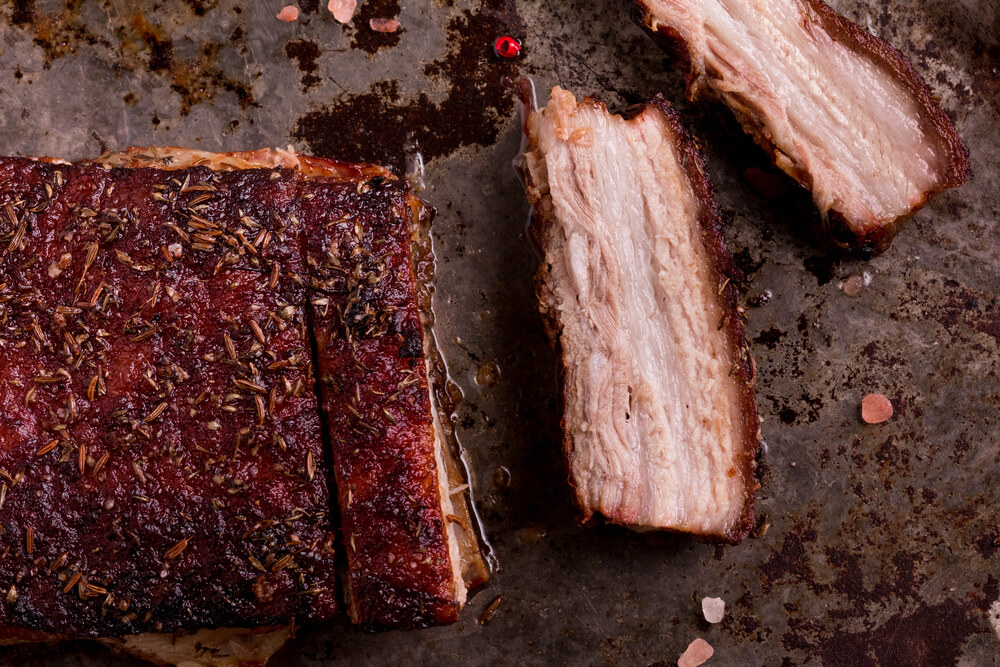 If you’re like us, you’ll love the simplicity of perfectly baked belly pork cuts. But, we also love just how well it works with a lot of other flavors. For instance, our sticky pork belly bacon with spicy bourbon maple, benne seeds, and sea salt showcases how versatile this cut can be.

Here are some other pork belly strips recipes you can try if you get tired of the straightforward baked belly.

Instead of using the whole cuts, you’ll section your belly into smaller pieces for this recipe. What you add in prep time, you’ll gain back in shorter cook time and fuller flavor.

Slice the pork bellies into cubes roughly ½ an inch in size. Try to keep the meat to fat ratio roughly equal in all the cubes. Add the cubes to a large skillet and start cooking on medium heat. When the fat has partially rendered, and the pieces are browned, remove the pieces from the pan.

Combine the rest of the ingredients in the pan and cook through until they’re combined. Then, add the meat back into the pan and cook until tender, stirring often. When serving, you can garnish the dish with toasted sesame seeds, chives, or both.

This dish is all about getting the glaze right. It’s easy to mess up but well worth the effort of getting it right.

Half should be enough to marinade about 6 half-inch-thick strips of belly pork. Simmer the other half in a small saucepan until it thickens to make the glaze. Marinade them and bake them as you usually would (refer to the instructions above). Baste them lightly two or three times while they’re cooking and as you turn them.

When they’re finished, serve them and glaze one last time. Garnish with chives. 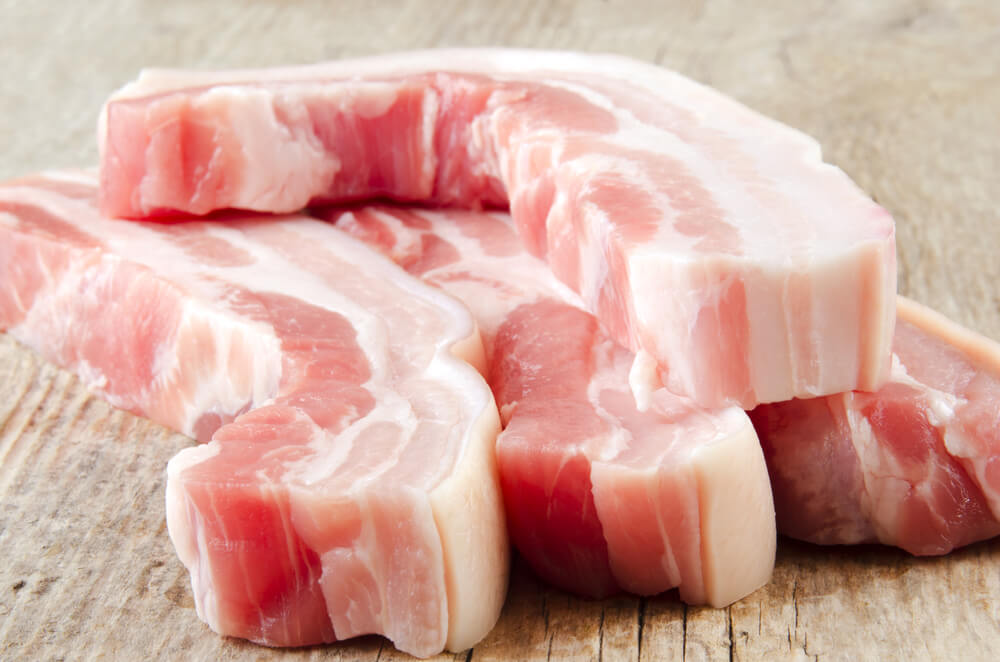 Hopefully, this dispels any mystery pork bellies held for you. There are only three simple rules:

1) Pick a nice, thick section of the belly, 2) score the skin, and 3) give it time to cook through. Slices are even easier. It’s enough to place them on a baking sheet and put them in a hot oven. You’ll be ready to enjoy perfectly crisped pork belly in no time.

If you have any favorite recipes that you want to share, we’d love to know what they are. Share them in the comments below.

Whenever you’re craving timeless American cooking with a dash of Southern charm and hospitality, make a reservation at Root and Bone. You won’t find better pork bellies on this side of the Mississippi.