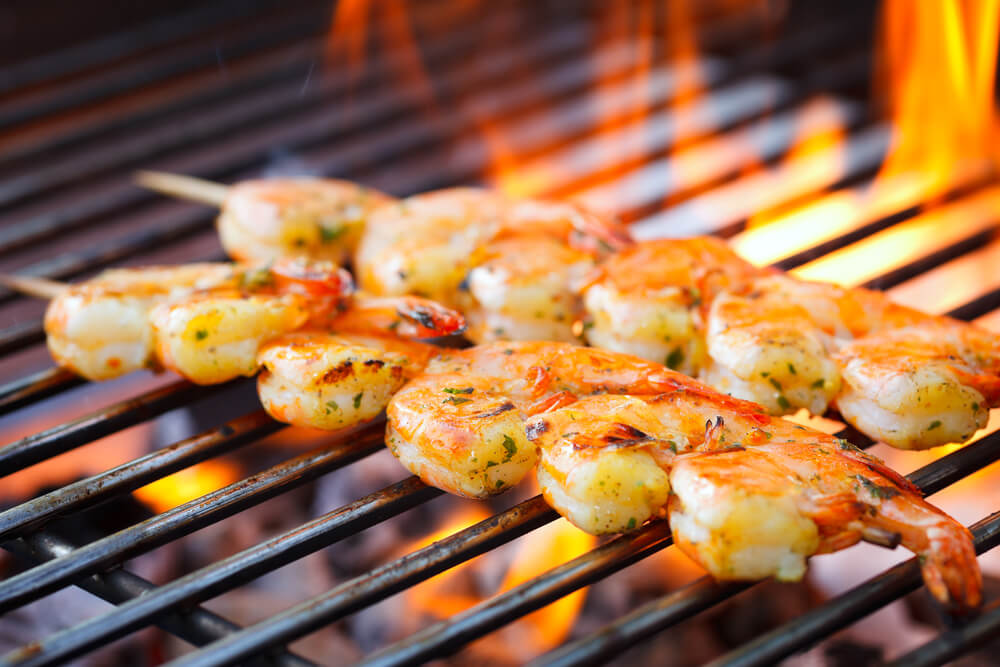 Grilled shrimp never goes out of style. It’s one of those dishes that you find yourself craving as much in the summer heat as you might in the chillier winter months.

And the secret to fantastic grilled shrimp is a shrimp marinade that covers all the bases. The marinade can be such a game-changer that it can make the same shrimp taste like entirely different meals.

That begs the question: what’s the best marinade for grilled shrimp?

Well, we can’t say what the best is, but we have several at the top of our list, and we’re going to share them with you in this article.

We’re going to start with a crowd-pleaser that you can always rely on. This marinade is ideal for shrimp, but you can use it for other seafood as well. Anytime you want to throw some shrimp on the grill, this marinade is your go-to.

Here are the ingredients you’ll need for about two pounds of peeled and deveined shrimp:

Right away, the cayenne pepper might jump out at you. But rest assured, it’s barely noticeable. And if you’re really worried about spiciness, replace it with some smoked paprika.

There’s not much prep to do. Combine all the ingredients in a large bowl and add the shrimp. Stir to coat them completely and let them marinate for up to two hours. Put the shrimp on skewers and grill for about three minutes on each side.

Now that you’ve got a solid recipe in your back pocket, we can move on to something a little more exotic. But don’t be fooled; even though this is an Asian-inspired marinade, it will still taste familiar.

This recipe is ideal for about two pounds of peeled and deveined shrimp:

First, finely dice the shallots, garlic, and ginger. You can then smash them all together with a mortar and pestle or skip that step if you don’t have one.

Once those three ingredients are incorporated, add in the rest and mix it in a bowl with your shrimp. You can try substituting the lime juice with rice wine vinegar if you prefer a less citrusy flavor.

From the farthest reaches of the Orient, we’re returning to the birthplace of so many culinary traditions. This marinade evokes tastes, flavors, and aromas you might find in Italy, Greece, and other Mediterranean nations.

You know the drill at this point. These are the ingredients for about two pounds of deveined shrimp:

It’s that simple. Olive oil is the star of this recipe, so feel free to splurge on high-quality olive oil for this one. You also want to make sure to use fresh herbs; dry herbs won’t have time to infuse appropriately in the 30-45 minutes you marinate the shrimp.

Once marinated, thread those bad boys onto some skewers and grill a few minutes on each side.

And we’re going to finish it off with the best of both worlds. This marinade hits a lot of notes from many different cuisines, but it all comes together in a glorious tasty explosion.

Unlike the other marinades on this list, this one also serves a glaze. When the shrimp are done marinating, reserve the remaining marinade and use it to glaze them once on each side as they grill. The starch in the mix will thicken it while you’re grilling and coat the shrimp beautifully.

The spiced rum in this marinade adds a depth of flavors and aromas that you’ll love. But don’t cake on the marinade while you’re grilling; a single pass on each side with a brush is enough to get them where they need to be, in terms of taste. 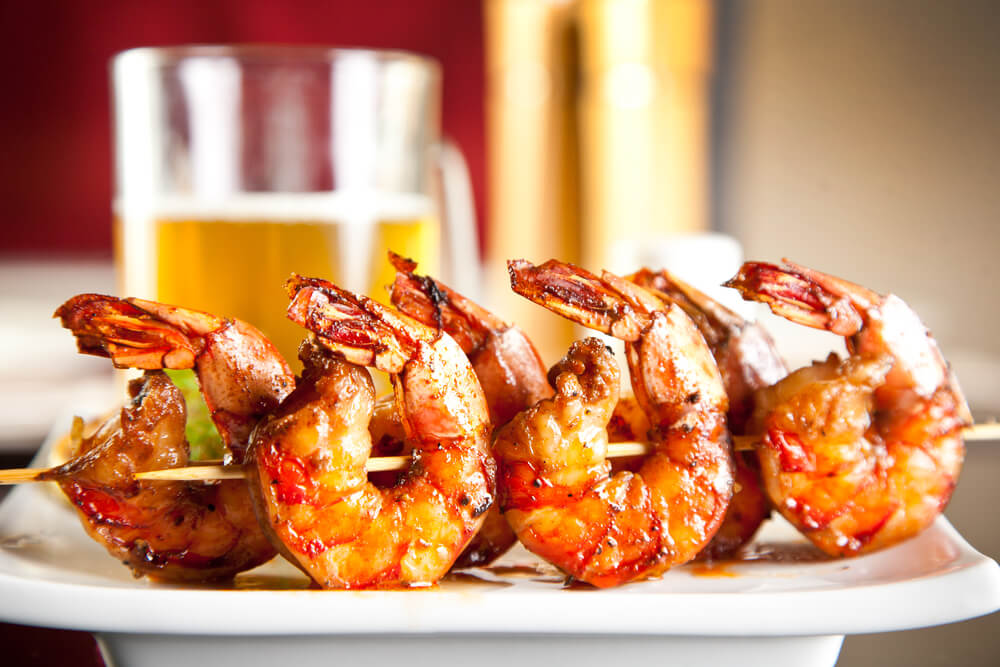 Make Your Own Shrimp Marinade

There are countless recipes for shrimp marinade out there for you to choose from. But only you can make one that’s precisely the way you like it. And if you just follow a few simple marinade rules, you can have one ready to go in less time than it takes to say shrimp cocktail.

Every marinade has three essential components — acid, oil, and flavorings.

You need some form of acid to help tenderize the meat. In the case of shrimp, they’re plenty tender already, so you want to go easy on the acid component. In fact, if you leave the crustaceans in an overly acidic marinade too long, shrimp will “cook” and become tough.

Your choice of acid should also reinforce the overall flavor profile of the marinade. For instance, Southwestern-inspired marinades do well with lime juice.

Oil is just as important because it helps the marinade penetrate the meat. Without oil, the marinade will just coat the meat. Additionally, spices like pepper and coriander have several components that aren’t water-soluble. So the oil also helps extract all the flavor components from them and infuse them into the meat.

And the flavorings come last. Here, you’ve got free reign to choose whichever flavors you like and in whatever quantities.

Explore your options and experiment with all sorts of different spices, sauces, and ingredients. Pretty soon, you’ll start to feel what flavors go well together and how to combine them to complement each other.

Shrimp are excellent for marinades because they don’t have a strong flavor and make a great canvas to try things on. However, they’re also rather delicate, so you’ll find that being conservative with the flavors will usually yield better results than trying to fit too much into one marinade.

Hopefully, one of these marinade recipes ends up being what you were looking for. And if they aren’t, you can simply make your own. Because at the end of the day, the best marinade for grilled shrimp is the one you can’t wait to eat over and over again.

If you have a recipe that never fails to deliver or you have some other questions about shrimp marinades, drop us a line or leave a comment right now, and we’ll be happy to get back to you.

And whenever you’re in the mood for shrimp, pick up the phone and make a reservation at our Miami location to reserve online. You can try our shrimp avocado ceviche or come in for brunch and get a shrimp, quinoa, and avocado bowl.