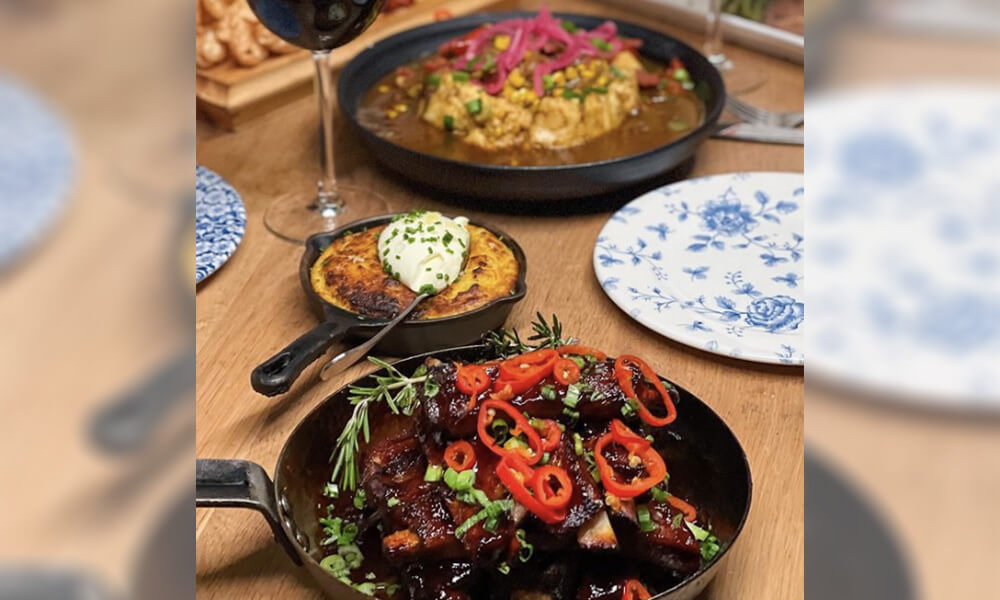 America is home to all sorts of cuisine. It’s a melting pot of people from all over the world, so naturally, all types of cooking are present on its grounds.

However, one type seems always to stand out. Southern foods hold a special place in all of our hearts, and no other cuisine can compete with the way comfort food makes us feel.

If you aren’t sure what we’re talking about, you’re missing a lot! But, don’t worry, you’re about to learn.

In this blog, we’ve gathered 8 classic Southern dishes everyone should know. From fried chicken to barbecue from the South, you have a lot to learn.

So wait no more, start reading, and see which Southern meals are your favorite.

And, to try the best Southern food in Miami, Florida, visit Root & Bone.

When something’s called the caviar of Southern foods, it’s a sign that you should appreciate its value. And this pimento cheese spread is just that. It’s made with mayo, cheddar, and of course, pimentos, and once you try it, you’ll see what all the fuss is about.

Southern pâté, as they call it, is quite a versatile dish so that you can have it at any time of the day. Having it for breakfast is quite an obvious choice, but lunch and dinner are no different.

If you wish to avoid all the calories cheddar brings in, try swapping it for carrots or celery.

This meal is included in every Southern food menu in the world, and for many reasons. Firstly, who can say no to it?

Chicken pieces coated in batter and fried are a real piece of art. It doesn’t even matter how you prepare it, air-fried, deep-fried, pressure fried; as long as it’s Southern-style chicken, it will turn out amazing.

One of the most famous Southern dishes originated from Scottish and West African people in the South of the States. The Scotts provided the frying methods, which paired unbelievably with African seasoning.

If you’ve never had this combination so far, we can’t say you’ve tried southern foods at all. Change this as soon as possible, get yourself a bucket of chicken, and see why it’s the best Southern food.

If you aren’t from the South, you likely don’t have okra that often on your table. But, if you’re trying out southern foods, it should definitely be included.

People from this part of the States enjoy having okra at the table no matter how you prepare it. No matter if it’s fried, pickled, or boiled in a stew, Southerners enjoy having it. It’s another one of those meals that every Southern food menu should include.

The fried version may be the simplest to try at home. Chop it up, cook in a skillet, and you’ll have a great party snack. Make sure to have a dipping sauce and let your friends try one of the first Southern dishes you’ve made.

P.S. – Choose ranch as your sauce. The combo goes perfectly together.

Other places in the U.S. also prepare a barbecue in their own way. Still, none of them come close to the BBQ of the South.

Besides the fried chicken, barbecue is easily the best Southern food you can try. It’s smoked and slow-roasted, so the meat is always tender. Then, it’s soaked with smoky flavors and topped off with mustard sauce. Don’t say that that doesn’t sound tasty.

When it comes to serving, there are a couple of options. You can go with pulled, shredded, or chopped barbecue. Still, on every important occasion in the South, BBQ is going to be present.

No matter if it’s lunch after church, a birthday, or the 4th of July, you can celebrate it without some adequately prepared meat.

As you know, most of the meals from the South are known as “comfort food.” And comfort food usually requires frying. The same goes for the Southern way of preparing seafood.

Though fried fish may not be what you’re used to, no one can say no to seafood prepared the Southern way.

Fried catfish and fried shrimp are the most popular options, and they taste amazing. Even if seafood isn’t your favorite option, give these a try. They don’t taste like what you’re used to with creatures from the sea.

No Southern food menu is complete without catfish on the list, so how can you experience the classics if you don’t give it a shot?

You may notice a trend by now. Most of these southern meals are fried, and all of them taste amazing. A dish mainly containing veggies would be a diet option in the rest of the world. But, things don’t work that way in the Southern United States.

Instead, the green tomatoes are sliced and coated in cornmeal and then, of course, fried.

If you aren’t familiar with them, green tomatoes or just the unripe version of the famous vegetable. They are pretty dense and taste amazing once deep-fried.

This dish is a perfect starter for any Southern meal.

It was about time that we had something not-fried on the list. The she-crab soup deserved to be on here, even though it’s not as heavy as some of the other meals mentioned.

But, it is one of the creamiest and richest bisque recipes you can find anywhere. It’s made from the meat of fresh female crabs and blended with cream.

This type of soup is famous in South Carolina and Georgia, but no matter where you find it, it will likely blow your mind.

Let’s finish the list in style – with something sweet. And, what better way to end the blog than the way we end all Southern meals – with a pie?

The pecan pie is the perfect Southern dessert. It’s full of flavor, meaty, and with a smokey element. Of course, it goes perfectly with whipped cream or vanilla ice cream.

There are so many variations out there, and you can’t go wrong with any of them. Adding chocolate, bourbon, lemon, and many other ingredients will only make the experience more extraordinary. Just don’t go too far and lose the original taste of the South.

Miami may not be known for Southern-style foods, but it has a place that provides the best comfort meals you can find in Florida.

If you find yourself in the area and craving real Southern food, make your way to Root & Bone. This place will make you feel like you’re having a meal at grandma’s home once again.