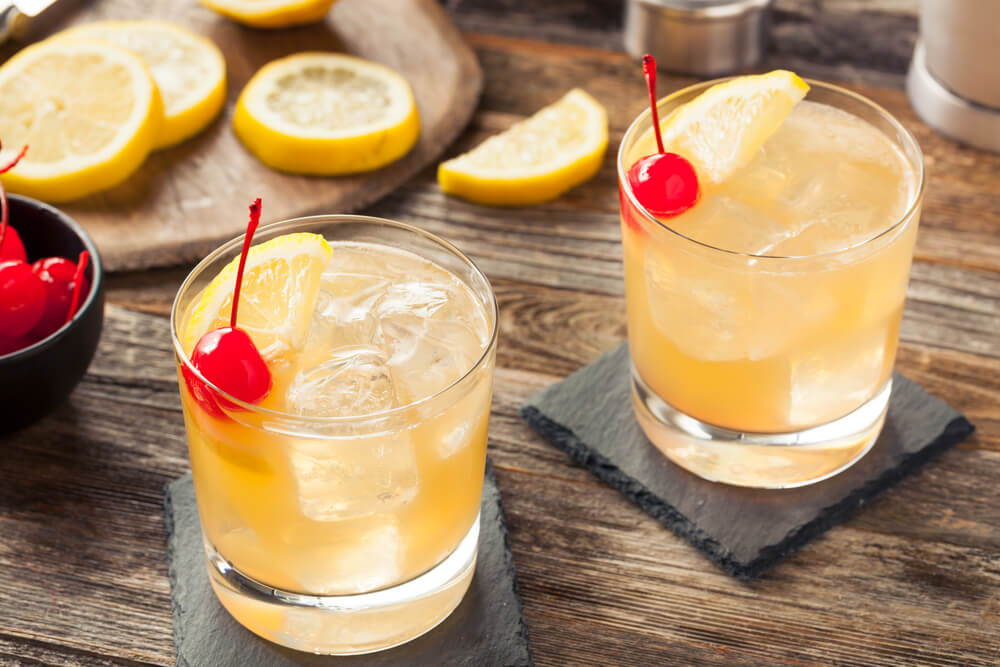 6 Tastiest Scotch Cocktails for Every Season

There are scotch mixed drinks out there that you can consume all year long. You just don’t know what they are. No worries, you aren’t the only one. Scotch has the reputation of a drink most often consumed by itself or with ice.

In fact, many people don’t even realize that scotch whiskey cocktails are a thing. We’re about to change that.

On our list, you’ll find both classic scotch cocktails like the Old Fashioned and some more modern mixtures like the Scotch Collins. We’ll explain how and when to make these drinks to get the most satisfaction out of them.

Keep reading to find the best scotch cocktail recipes and learn how to make them.

Whiskey Sour is quite a famous drink worldwide. Most people don’t think about the possible variations and just order it with the house whiskey. However, switching to scotch has its advantages.

Scotch drinks usually have a smokey undertone and a more complex body than mixtures made with regular whiskey off the shelf.

The ingredients you’ll need to make one of the most famous classic scotch cocktails are:

There’s no funny business when it comes to making a scotch sour. Simply put all the ingredients into a shaker, and once you cool the drink with a few shakes, pour it over ice.

Most scotch whiskey cocktails don’t require many decorations but only a simple garnish at the end. In this case, to finish the drink-making process, you’ll need a cherry and an orange slice.

This is a list of the tastiest scotch cocktail recipes for all seasons. Well, you can cross off Fall. Since most people associate Rusty Nail with that time of the year, you can say it’s best consumed on a cold afternoon.

Many scotch whiskey cocktails have intriguing and unique names, but Rusty Nail is particularly interesting. There are a few possible ways the drink could’ve gotten its name, none of which are certain to be accurate.

Most people believe the cocktail used to be stirred with a rusty nail and that the name comes from these stories. Others believe that the drink’s color inspired the name or that the term comes from the nails holding together the Drambuie cases.

Regardless of how it got its name, Rusty Nail is one of the most famous scotch mixed drinks worldwide, and you should know how to make it.

You won’t need anything else except a glass and some ice. And the garnish requires only a lemon peel. So, pour the ingredients over ice into an old-fashioned rocks glass, stir, garnish and sample the drink.

If you like your scotch drinks with a bit of sweetness, Blood & Sand is your cocktail. It contains liquor, cherry, orange notes, and sweet vermouth. Talk about a summertime delight!

Check out its ingredients and learn how to make one of the best scotch mixed drinks for the summer.

Most bartenders recommend blended scotch when making this type of cocktail, so pay attention to the label before you start mixing.

Unlike most classic scotch cocktails, Blood & Sand is served in a coupe or a martini glass. So, start by cooling it off. Add all of your ingredients into a shaker with some ice, and give it all a shake.

Once you chill the drink, strain it into an adequately chilled glass. Finish the drink with an orange peel garnish, and it’s ready for serving.

You’ve probably heard of the famous gin drink called Tom Collins. Maybe you weren’t expecting its variation amongst scotch cocktail recipes, but here it is. Scotch Collins is a perfect cocktail for late Spring and early Summer’s warm days.

Check out the ingredients needed to make this refreshment:

Remember that using freshly squeezed juices is the best solution for making any type of cocktail, and it’s no different with scotch drinks. Your mixtures will be only as good as your ingredients.

Also, using blended scotch whiskey for this recipe will give you the best results.

Shake all the ingredients with some ice until the liquids cool, and strain over more ice into a glass. Using a taller glass will leave some room, so make sure you don’t forget to pour soda to the top. A lemon slice is all you’ll need to finish the arrangement and serve your drink.

Bourbon is the liquor you probably think of when someone mentions the Old Fashioned, but a scotch version might pleasantly surprise you.

Old Fashioned is the first cocktail ever invented, so it’s only natural for it to have variants with different types of liquor. In this case, using a balanced single malt is the way to go.

Check out the rest of the ingredients and learn how to make the most famous cocktail in the world with a bit of a twist:

Of course, the Old Fashioned is served in a rocks glass. To start, add a sugar cube to the glass, and shake two dashes of bitters on it. Then, pour water on top of it, and muddle the sugar.

Most fancy places will serve you a single ice cube with an Old Fashioned. If you have access to it, using large pieces of ice is the best option. If you don’t have these luxuries, use regular ice and pour the scotch on top of it. Proceed by adding the scotch and the ice.

Squeeze an orange peel into the drink, add it to the glass along with a cherry, and the cocktail will be ready to serve.

Rye whiskey is what usually belongs in a Manhattan recipe. In this case, we’ve swapped rye with scotch and got a boozy delight called Rob Roy.

It may not be the most famous drink on this list, but Rob Roy indeed has something to offer in the taste department. Check out what you’ll need to make it:

Just like a Manhattan, a Rob Roy deserves a martini glass. Just make sure it’s chilled before you pour the drink. Firstly, add some ice and the ingredients into a mixing glass and stir to cool off the liquids.

Then, strain the cocktail into a prepared martini glass and garnish with a cherry. Give it a shot and see if you prefer this version over the original Manhattan.

If you ever find yourself in the Miami area, visit Root & Bone restaurant. Our bartenders will serve you the best scotch cocktails you’ve had in your life!