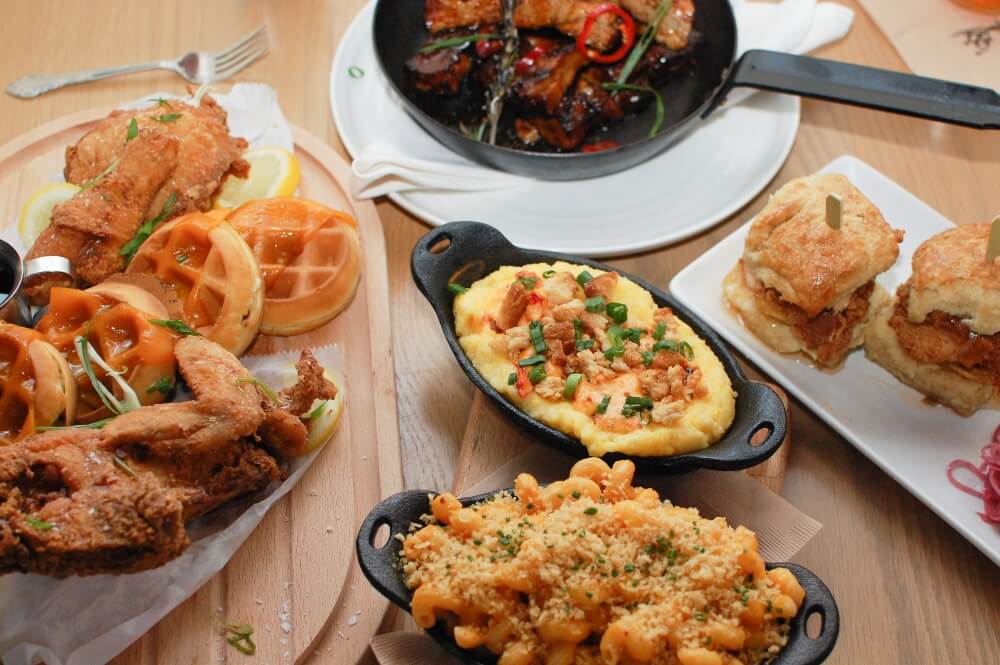 Of course, it’s just a little bit better at Root and Bone, but who’s keeping track? To settle the scores, we put together our favorite recipes for soul food to share with you. Whether you grew up in the South or still don’t know your Cajun from your Creole, you’re going to find something here that knocks your boots right off!

For many people, a Southern soul food menu starts with fried chicken and ends with biscuits. But there’s a lot more to it than that. That said, we’d be doing you and everyone else a disservice if we didn’t start with fried chicken…

With some recipes, it’s all about the care you put into making sure every bit of the dish comes out perfectly. Fried chicken is not meant to be all that complicated. Go to any real Southern restaurant, and the cooks will tell you the real secret to fried chicken is to keep it simple.

A thin crispy coating and juicy chicken meat are all you need to transport your taste buds to fried chicken paradise. Here’s what you’ll need for this recipe:

Season the flour with salt and pepper in a large bowl and set it aside. Combine the eggs and milk in another bowl and set them aside.

Any frying oil will get the job done, but it’s best to stick to something neutral that won’t change the chicken’s taste. Fill a heavy-bottomed pot with oil and slowly bring it up to 325 degrees.

In the meantime, season your chicken with salt and pepper and dip them in the egg and milk mixture. Let the chicken pieces drain briefly and then dredge them in the flour one by one and transfer them into the oil.

Fry white meat for about 15 minutes and dark meat for about 20, being careful not to allow the temperature to increase beyond 325℉. Fry only two to three pieces at a time and set them on a paper towel-lined baking dish to cool for 5–10 minutes before serving.

Collard greens are the typical staple of soul food recipes but mustard greens or even kale will work in this recipe. Of course, if you want to keep it authentic, you’ll use collard greens.

Put together these ingredients:

Grab the biggest skillet you have and line the bottom with a thin coat of olive oil (about 2–3 tablespoons). Mince the garlic and saute it lightly before adding your collard greens. It shouldn’t take more than a minute for the garlic to become fragrant, and you definitely don’t want to let it burn.

Once the collard greens start to wilt just a bit, add in the ham and spices and let it cook over medium heat covered for about five minutes. Sometimes collard greens take a little longer to soften up, so test the greens and let them steam for a minute at a time until you reach the desired texture.

Nothing screams homemade southern cuisine like freshly-fried hush puppies. They’re as Southern as apple pie, so no Southern menu is complete without them.

There’s a theory that hush puppies are named that because they used to be a way to get dogs to stop barking. If that’s true, we think those dogs were having the time of their life!

In keeping with the trend of simple soul food recipes, these hush puppies are very basic but deliver a delicious result that everyone will love.

First, whisk together your egg, milk, and onion together in a bowl and then add in the pancake mix and cornmeal. Stir together lightly and set aside for a few minutes to allow all the ingredients to incorporate.

In the meantime, heat a quart of frying oil in a large heavy-bottomed pot to 350℉. When it’s ready, use an ice cream scoop to make ping-pong-sized balls of batter and drop them in the hot oil. Fry them until golden brown and then transfer them to a plate lined with paper towels. Don’t fry too many at a time and serve as soon as they’re cool enough to eat.

If you want to talk about the best Southern food, it’s only fair that we include gumbo among the list of dishes we can’t live without. Many folks assume gumbo is hard to get right because of the long list of ingredients, but as long as you get some basics right, it will come out perfect every time.

The ingredients you need:

In a large pot, heat the oil on low heat and gradually stir in the flour until it’s incorporated and cooked for about five minutes. Reduce the heat and stir in the onion, bell pepper, celery, garlic, and season generously with creole seasoning. Keep stirring for about 10 minutes.

When the onion and celery are sauteed, add in all the other ingredients minus the shrimp. Increase to medium heat and stir for about 5 minutes before allowing to simmer for 20 more minutes. Then, stir in the shrimp and cook for another 5 minutes before taking off the heat. Serve immediately.

And, we’re ending our Southern soul food menu with biscuits to go with the fried chicken where it all started. All you need are five ingredients and a lot of love.

Chop up your butter into small cubes and leave it in the freezer for about 10 minutes. When it’s cold but not frozen, work it into the flour with your hands and then combine the rest of the ingredients. When the dough is combined but not worked through, transfer it to a floured surface and use a biscuit cutter to cut it into circles.

Place on a parchment-lined baking sheet and bake at 425℉ for 10–12 minutes or until the tops are brown. Remove from the oven and serve immediately.

These five recipes should give you plenty to work with on your next cookout, dinner party, or Sunday lunch. But if you’re craving authentic Southern cooking in the Miami area, you’re not going to find a better option than Root and Bone.

Reserve a table with us right now, and we’ll be sure to leave the porch light on for you.

Which one of these recipes will you try out next? Did we leave something out that deserves to be on this list? Let us know in the comments below!