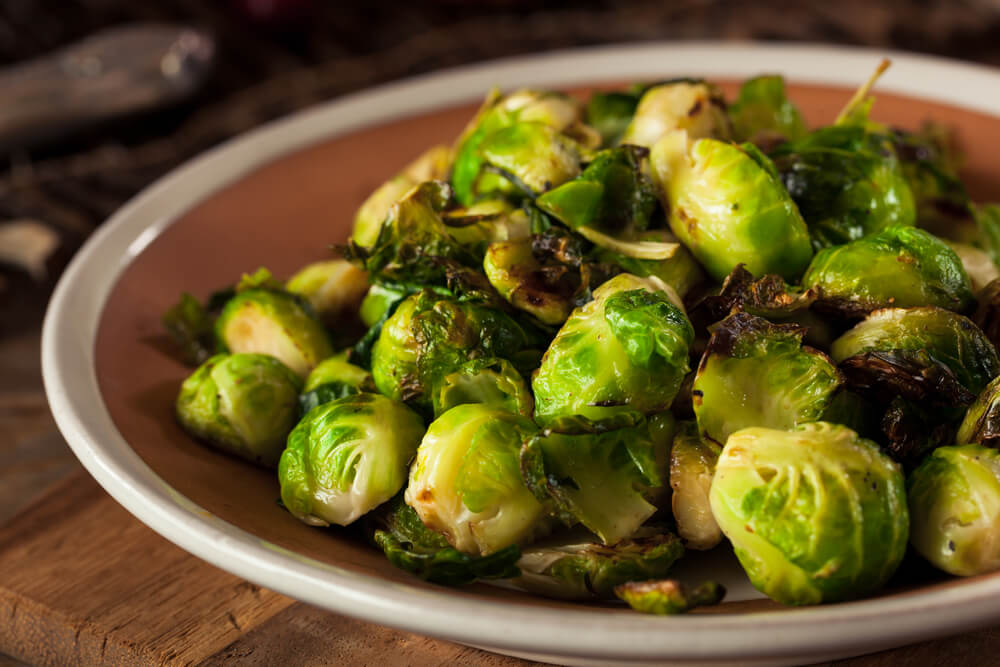 Brussels sprouts probably weren’t your favorite vegetable as a child. And there’s a good reason for that.

By and large, boiled Brussels sprouts were the norm in the last few decades. Boiled sprouts are, to be frank, quite boring. But that’s not the case anymore. Cooking techniques have evolved and the once shunned vegetable now holds an enviable position in kitchens around the world.

In this article, we’re going to reintroduce you to Brussels sprouts and show you why the way you cook them makes all the difference.

What Are Brussels Sprouts?

Before getting into the cooking tips, it’s worth briefly noting what Brussels sprouts really are. If you’ve ever thought they look just like a small cabbage, you’re exactly right. They’re a type of cabbage and a member of the brassica family. Other foods in the same group include cauliflower, kale, and broccoli.

In taste, they resemble cabbage, but they’re more bitter and nutty. They also have a much more peppery bite to them, like raw cabbage.

Despite their name, they’re native to the Mediterranean region but they’ve been extremely popular in Belgium for a long time. And therein lies the first problem.

The most popular way to prepare them was boiling. And we shouldn’t have to tell you that boiled vegetables are not all that exciting, to say the least. The thing about boiling is that it’s so easy to overcook them. When you boil Brussels sprouts they tend to become gray, soft, and insipid.

That’s not to say that boiling has to render the buds inedible; it just takes a practiced hand to get it right. But let’s not get ahead of ourselves. First, let’s learn how to prepare them for cooking. 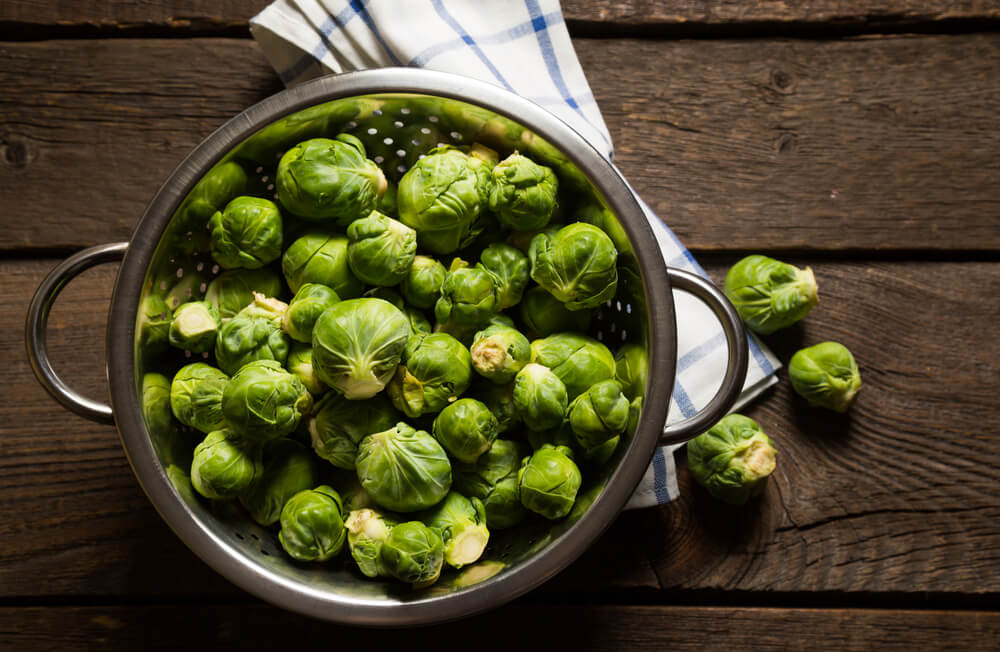 How to Prepare Brussels Sprouts

The first step to perfectly cooked sprouts is buying the right ones. The best way to buy them is untrimmed, that is to say, still on the stalk. However, it’s not mandatory.

Store the cleaned buds in a resealable plastic bag in your refrigerator. They can stay there for about a week.

When you’re ready to cook them, trim the ends off or cut them close to the bud if you purchased a stem. Lightly brush them with your fingers looking for loose leaves and discard them. Wash them in cold water and let them dry in a colander.

How to Cook The Perfect Brussels Sprouts

You probably didn’t expect to be learning about Brussels sprouts from the best Southern restaurant Miami has to offer, but here we are. We’re huge fans of this delicious and versatile vegetable, and you should definitely give our Brussels Sprout & Farro Bowl dish a try when you pay us a visit. These are our favorite ways to cook them.

Roasting is among the top cooking methods for most vegetables, but it’s exceptionally effective with Brussels sprouts. And that’s because it brings out the natural sugars in vegetables making them a little sweeter, which is exactly what these bitter greens need.

Here’s what you’ll do:

First, cut the prepared sprouts into halves. If you have huge sprouts, cut them into quarters. Then, put them in a bowl, toss them with plenty of olive oil and add salt and pepper to taste.

Arrange them into a single, uncrowded layer on a baking sheet lined with parchment paper. Place them in a preheated oven at 450℉ and roast for about 30 minutes, tossing every 10 minutes or so.

For a special kick, lightly drizzle them with maple syrup while they’re roasting.

As we said earlier, boiling is not a death sentence. It just needs to be done right. The biggest mistake people make is not knowing how long to boil Brussels sprouts.

The good thing about boiling these little cabbage wannabes is how quick it is. If you start with prepped sprouts, you’ll be done in less than 10 minutes.

For about a pound of buds, bring two cups of water to a boil in a 4-quart saucepan. Cut them in half and put them in the boiling water for 5 minutes. After five minutes, drain them and add salt to taste. Serve immediately.

It’s crucial to drain them, else they continue to cook in the hot water and become soggy. Serving immediately is also highly recommended since they don’t get any better if they sit out too long. 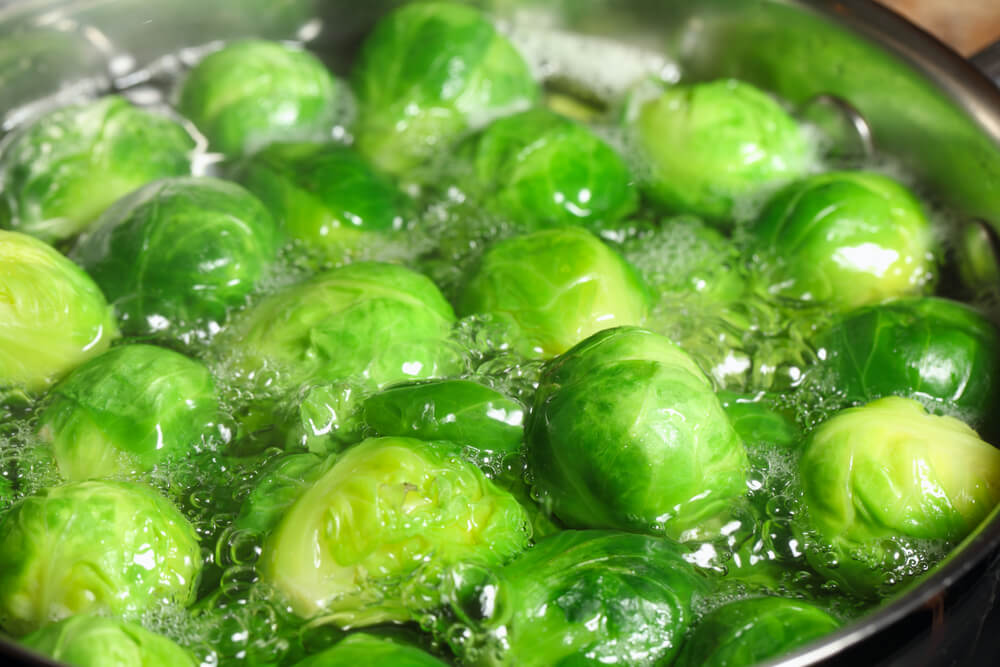 Braising is similar to boiling, but it adds a dimension of flavor that’s not quite there when you boil something. It takes a tiny bit more effort for a whole lot more tastiness.

To braise your sprouts, halve them and place the skillet over medium-high heat. Then, add 2 tablespoons of olive oil and 2 cloves of minced garlic. Once the garlic starts to sweat, add your sprouts and toss them in the olive oil for about 2 minutes. Add a cup and a half of chicken broth and continue to cook for about 20 minutes on low heat.

As soon as they’re tender, season them with salt and pepper and serve immediately.

The secret to sautéeing any vegetable is getting enough fat in the pan. Without it, your vegetables are bound to end up tasting flavorless.

That said, you’ll want to cut your buds into quarters if you choose to sautée them since it will cut down the cooking time significantly.

Start with about three tablespoons of olive oil in a hot skillet. Add a pound of quartered Brussels sprouts with a minced clove of garlic and toss them well. Continue stirring frequently for about 10 minutes or until the sprouts are tender. Season them and serve immediately.

If you really want to make an impression, squeeze half a lemon into the skillet when the sprouts are just about done. The splash of acid will serve as a brought contrast to the tasty caramelized sugars of the sprouts.

If you don’t want to take any chance at a dinner party, a gratin will make everyone regardless of how they feel about Brussels sprouts. And, to be fair, it’s almost like cheating because even people who hate vegetables can’t say no to the creamy goodness of a well-made gratin.

All you have to do is cut your buds into halves and roast them in a deep roasting pan along with some rough-cut onions or shallots for about 10 minutes. Then, take them out of the oven and cover them with a generous amount of cream. Top the vegetables with melting cheese, such as Gruyere, and back in the oven they go.

After your gratin is all nice and bubbly, sprinkle it with some breadcrumbs and roast for five more minutes before serving.

If You Want to Delight, Cook Them Right

Those are our favorite ways to cook Brussels sprouts. If you’re truly a lover of boiled sprouts, there’s certainly a way to make them palatable. Just don’t overcook them.

However, it’s about time you moved on to something more exciting. Sautéed Brussels sprouts will completely change the way you feel about them, we promise. But if you’re not feeling all that adventurous, a vegetable gratin is always a crowd-pleaser.

We showed you ours, now you show us your favorite ways to cook Brussels sprouts. Will you be trying any of these 5 recipes?

And if you’re not reality feeling like cooking, we’re here for you with the finest food South of the Mason-Dixon line. Make your reservation today!