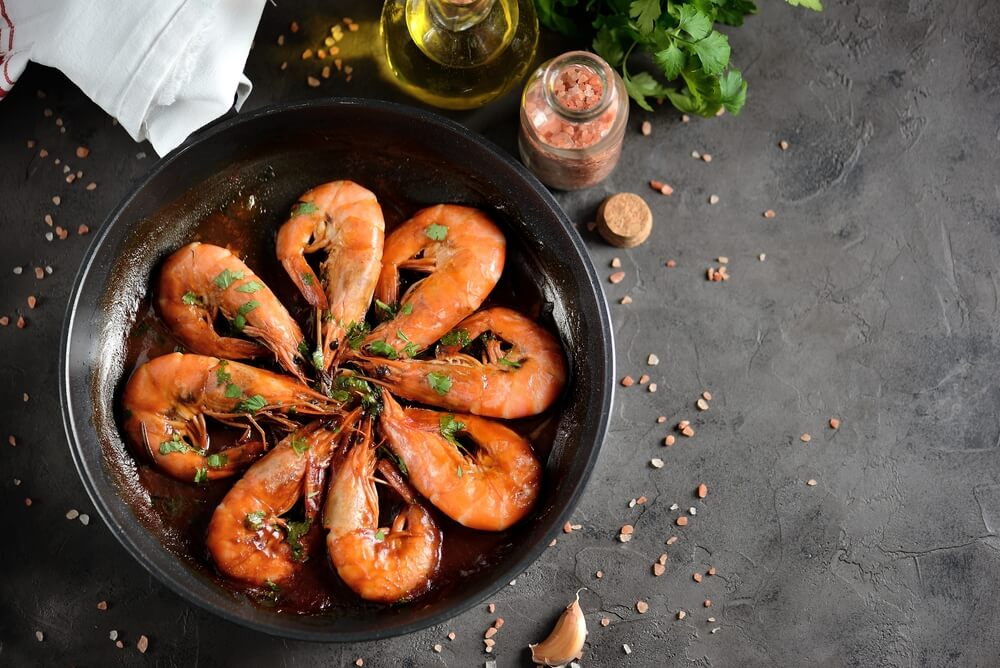 If you’ve ever watched Forrest Gump, you surely remember Bubba’s famous monologue about shrimp. As he very well put, shrimp is the fruit of the sea. You can barbecue it, boil it, broil it, bake it, sautee it…

You get the point.

Bubba may have been stretching it a bit, but there are certainly more ways to cook shrimp than you can shake a stick at. If you’re a shrimp lover looking for a few new recipes or if you’ve never had shrimp before, try one of these perfect recipes to get your shrimp fix.

Different Ways to Make Shrimp on a Stovetop

Cooking shrimp on the stovetop is one of the easiest and quickest ways to go about it. The kicker is that it’s also among the most versatile.

For the most basic recipe, all you’ll need is:

For the seasoning, you can use a commercial blend, but you can also make your own. Commercial shrimp seasoning blends typically include celery salt, paprika, black pepper, and red pepper flakes among others. Italian seasoning with some salt and pepper and a dash of paprika also works very well for this dish.

First, season the shrimp in a mixing bowl. Make sure they’re all evenly coated. Heat the butter in a large skillet over medium-high heat until it’s completely melted. Wait until the butter stops bubbling, but don’t let it start browning.

Then, add the shrimp and cook them for about two to three minutes per side. You only want to flip them once. To know if they’re done, look at the split where the vein was before they’re deveined. When the flesh in that dip turns opaque, they’re ready.

When they’re finished cooking, squeeze your lemon wedge into the pan and lightly toss. Serve them immediately with pasta or rice. This basic recipe can be modified to produce a wide range of flavors and styles. 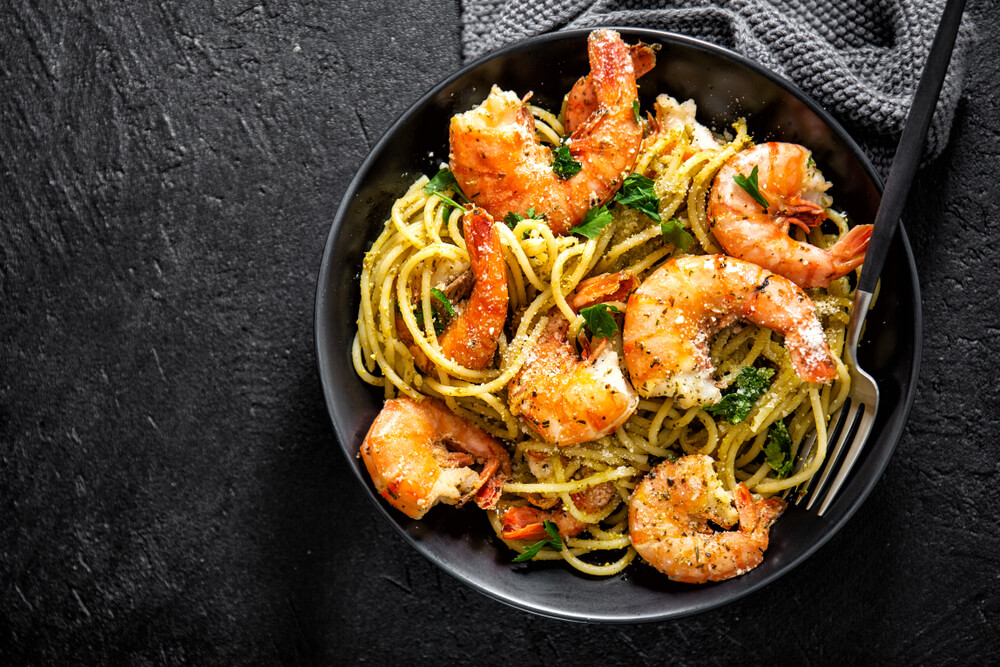 For an Asian twist, marinade the shrimp instead of seasoning them. Use this recipe for the marinade:

Marinade them for about an hour, then discard the marinade and sautee your shrimp. Garnish them with toasted sesame seeds when they’re done.

It’s no secret that Cajun dishes and butter go together like peas and carrots. But that makes them a little problematic when you’re in the mood for a light meal.

Luckily, the versatility of this shellfish knows no bounds. You’ll find many easy shrimp recipes without oil or butter. In fact, shrimp salad is one of the most popular ways to enjoy them.

For this recipe, you’ll need shrimp. But not any old kind.

Smaller ones work better for salads. You’ll want to get 41/50 or 51/60 size shrimp, otherwise known as medium and small, respectively. You’ll also be boiling these, not sauteeing them.

For a pound of them, you’ll want about three quarts of water. Once the water reaches a rolling boil, dump in the thawed shrimp. We recommend you leave the shells on if you’re boiling them, but it’s not mandatory.

Once the water comes back to a boil, they’ll be done in about two minutes. As soon as they’re opaque and take on that characteristic red hue, you’ll know they’re cooked. Drain them immediately, and chill. Peel them if you left the shells on. If you want to get creative, add some garlic salt and a bay leaf or two to the water.

Here’s what you’ll need for the dressing:

Combine all the ingredients of the dressing together and toss with the boiled and peeled shrimp.

For best results, let this salad chill for a few hours for all the ingredients to fully infuse. You can serve it with pasta, red potatoes, some variety of rice, or even grilled vegetables. Alternatively, follow this same recipe, but grill the crustaceans instead of boiling them.

Grilling adds a little smokiness and gives the dish a fuller flavor profile. If you do decide to grill them, buy slightly larger ones, that you can either put on a skewer.

4. The Classic: Shrimp And Grits

If any dish can be called a signature shrimp dish, it’s shrimp and grits. Nothing captures the Lowcountry spirit quite like this perennial favorite among Southerners.

And the beauty of it lies in its simplicity.

At Root and Bone, it’s one of our favorite dishes, and it’s proudly featured on our menu. We start with Royal Red shrimp. This variety is a little sweeter and has a texture similar to that of lobster.

Then, they’re paired with perfectly cooked, creamy grits. But it doesn’t end there.

We top the grits with succulent, slow-roasted melted tomatoes, pickled onions, sweet corn, bacon and beer. The result is a blend of textures, flavors, and aromas that you won’t soon forget.

But, if you want shrimp and grits without too much fuss, that’s OK too. All you’ll need is sauteed shrimp and some stone-ground grits. Use the instructions above to prepare the shrimp. Instead of butter, you can use bacon grease for an added kick.

Boil a cup of grits in about four cups of water or until it’s all absorbed. Spoon the grits into a bowl, mix in the shrimp and enjoy. 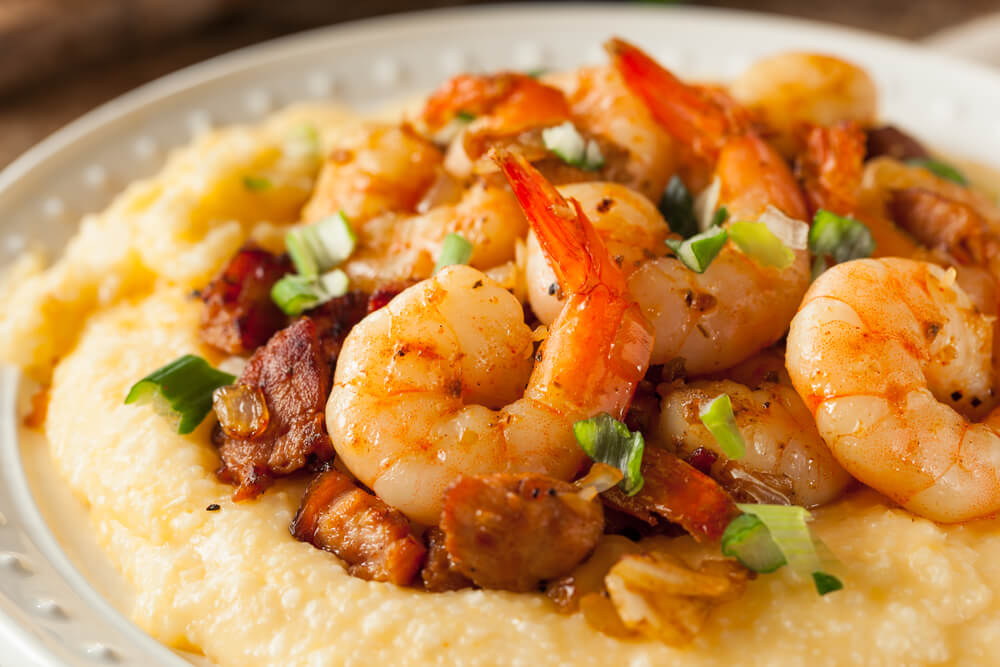 DO clean them thoroughly. If you buy them cleaned, you’re fairly safe, but give them a once over just in case. Remove any remaining bits of the vein if you find them.

DON’T thaw them in the microwave. Ideally, you’ll use fresh shrimp. Realistically, most of the time, you’ll only have access to frozen ones. The way to thaw them properly is in a colander in the refrigerator.

DO give yourself a chance to mess up. Crustaceans can be a little finicky, and you can easily end up under- or over-cooking them. So, follow the instructions in this article as well as you can, but if it doesn’t come out perfect, don’t despair. With a little practice, you’ll have it down pat in no time.

DON’T leave the shells on. In some parts of the world, it’s customary to eat them with the shell. But not in this part of the world. Don’t do this.

As you can see, there’s nothing scary about cooking shrimp. It’s mostly in the details of thawing them right and being careful not to overcook them.

Do you have a shrimp recipe you’d like to share with us? We always love learning about new takes on classic foods.

A Root and Bone, we serve classic American food without the fanfare. If you’re in the mood for the most delicious shrimp and grits you’ve ever had, bar none, you’re in luck! Book a table today and head on over.

We’ll leave the light on for you.